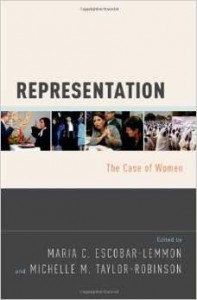 While there is a vast literature on women’s political interests, there is hardly any consensus about what constitutes “women’s interests” or how scholars should approach studying them. Representation can occur in various venues or by various actors, but, due to power imbalances across political groups, it is not always realized in any substantive way.

The essays in this book constitute a broad and geographically comparative move toward defining new and unified theoretical orientations to studying representation among women. Representation involves not only getting group members into government, but also articulating group interests and translating those interests into policy. Because competing groups have different policy preferences and act out of self-interest, representation of historically marginalized groups is a contentious, contingent process that is likely to ebb and flow. The book begins with a theoretical positioning of the meaning of women’s interests, issues and preferences. It considers the need to add nuance to how we conceive of and study intersectionality and the dangers of stretching the meaning of substantive representation. It then looks at descriptive representation in political parties, high courts, and legislatures, as well as how definitions of “interest” affect who represents women in legislatures and social movements. The book concludes by suggesting testable propositions and avenues for future research to enhance understanding about representation of women and of other historically under-represented groups. Chapters include cases from the United States, Latin America, Western Europe and Africa.